The amount of power used by each data center rack continues to rise for enterprise users, according to new research from AFCOM, the industry association for data center professionals.

The 2020 State of the Data Center report found that the average rack density increased by nearly an entire kilowatt (kW) from the previous year, jumping to 8.2 kW per rack, up from 7.3 kW in the 2019 report and 7.2 kW in 2018. About 68 percent of respondents reported that rack density has increased over the past three years, with 26 percent saying the increase was “significant.”

The new report reinforces a trend towards higher power rack density, which has been showing up in both analyst research and user surveys like the AFCOM State of the Data Center research, which Kleyman presented online rather than in a keynote at the postponed Data Center World event.
“Don’t be surprised as rack density continues to grow,” said Kleyman. “We’ve seen it grow substantially over the last couple of years, and the average grew an entire kilowatt from last year.  That’s not a little bit of growth – it’s an entire kilowatt inside of a rack. That’s a telltale sign that people are putting more gear in each rack. You’re using space for wisely, and you’re making your racks work for you. I think that’s a good thing.”

Power Densities Rise Along with AI Adoption
A major factor in rising densities is the rise of data-crunching for artificial intelligence (AI). Powerful new hardware for AI workloads is packing more computing power into each piece of equipment, boosting the power density – the amount of electricity used by servers and storage in a rack or cabinet – and the accompanying heat.

“AI requires large amounts of data and processors, often coupled tightly when the model requires a single shared memory pool,” 451 Research notes in a recent report. “Such equipment typically needs more power than generic servers. In fact, 1kW per rack unit (and there can be 30+ units in a rack) is the current trend for HPC/AI servers, leading to power use of 20-40kW per rack or more, and thus requiring different cooling at scale.”

The AFCOM data suggests that high-density racks are no longer focused solely on hyperscale providers and high-performance computing (HPC) centers, but being felt in the enterprise and on-premises data centers. Survey participants average about 6,000 SF of data center footprint, considerably less than the typical high-density user profile. 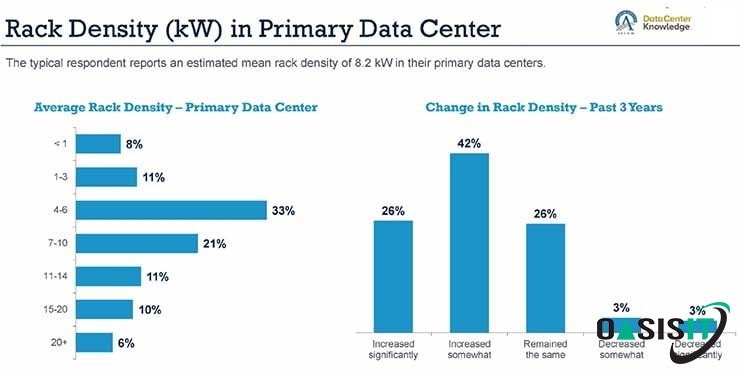 The largest group of users was in the 4 to 6 kW per rack range, but 27 percent of respondents cite an average of at least 11 kW per rack. Kleyman believes this is significant.
“It definitely feels like the square footage of the traditional data center now focuses on density and efficiency, rather than space and size,” the report notes. “Over-building and over-subscribing have caused some leaders in the industry to rethink the way they deploy critical infrastructure.”

A High-Density Challenge for Legacy Data Centers
We’ve been tracking progress in rack density and liquid cooling adoption for years at Data Center Frontier as part of our focus on new technologies and how they may transform the data center. The reports of increased density from 451 are not a surprise. In our DCF 2019 forecast we suggested that “liquid cooling was finally ready for its closeup.”

Most servers are designed to use air cooling. A number of service providers have focused on air-cooled solutions optimized for high-density workloads. Others are housing gear in cabinets equipped with water-cooled chilling doors. A small group of HPC specialists offer either water-cooled servers or various approaches to immersion cooling.

Members of the Data Center Institute board, which guides the AFCOM research, predict that the upward trend in rack density is likely to continue.

“Right now, there are 10s of gigawatts of lower density equipment out there, deployed over the last 10 years,” said Mark Monroe, Infrastructure Engineer at Microsoft. “It’ll take another 10 years to replace that existing stock with incrementally higher density equipment, each year raising the average density slightly, but not dramatically.”
451 Research says even traditional CPUs are becoming more power-hungry.

“Chip manufacturers are boosting the power of chips across the board in response to customers’ appetite for more processing capacity, so even traditional servers and networking equipment are starting to use more power in the same footprint,” 451 writes. “This rise in power density will become increasingly difficult for legacy data centers to handle efficiently and at scale.”